Milan Pro (the Genesis version of our Adaline theme that we sell on StudioPress) just got an update! 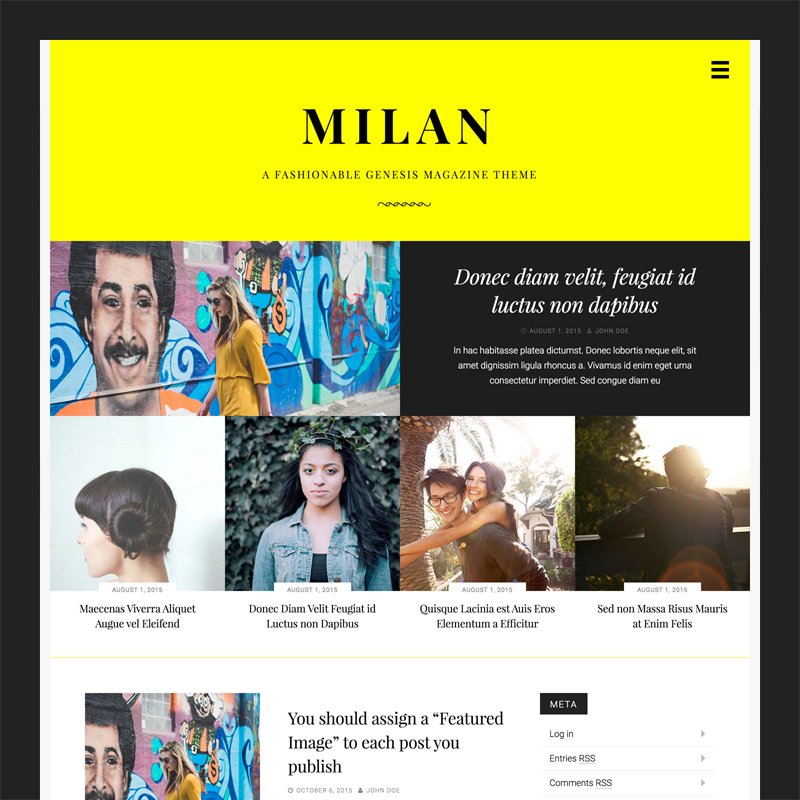 This update adds Jetpack Featured Content functionality and fixes a Masonry bug that could be seen on archive pages with featured images (which they probably do).

In an attempt to make the Milan Pro theme more “Genesis friendly,” instead of using Jetpack Featured Content (like I did with Adaline) I set up a “Featured Content” widget area in its place, intended to house two “Genesis — Featured Posts” widgets.

Trying to use the Genesis Featured Posts widget in such an unusual way (as opposed to, just using it as a traditional sidebar widget as intended) would prove to be a mistake on my part.

There were two problems with it.

First, it was a pretty tedious process. Each of the two Genesis Featured Posts widgets needed to be configured with very specific settings.

If even one setting was off, it could make the whole featured content section look off. Since this section is what gives Milan Pro such a distinctive look, this was a pretty big problem.

Featured posts were not excluded from the main loop

This was the most common support request, and I didn’t have a very good response to it.

Before Milan Pro 1.1.0, I would recommend one of three options:

None of the above solutions were ideal.

The first two “category exclusion” techniques would require Milan Pro users to re-categorize posts outside of the featured category after five featured posts are published, otherwise older featured posts would be hidden from the main loop forever.

The “date adjustment” technique could also be described as a “sweep under the rug” technique. The featured posts are still in the main loop, they’re just out of sight at first.

Every site I have ever seen using Milan Pro utilizes the featured content section. Like I said, it’s what gives Milan Pro such a distinctive look.

Considering that, I wasn’t going to just rip out the existing Featured Content widget area setup, leaving anyone who updated an empty featured section.

Migrating is an opt-in process, which goes like this:

No need to “backup” your old Genesis Featured Posts widget settings. No need to re-categorize older featured posts to get them to show up in the main loop anymore. No more repeated posts.