By this time last year, I had given notice for my last “real” job, finally making the decision to take the plunge into full-time entrepreneurship.

While 2016 certainly had its ups and downs, I’d do it all over again, and look forward to continuing my progress into 2017 and beyond. 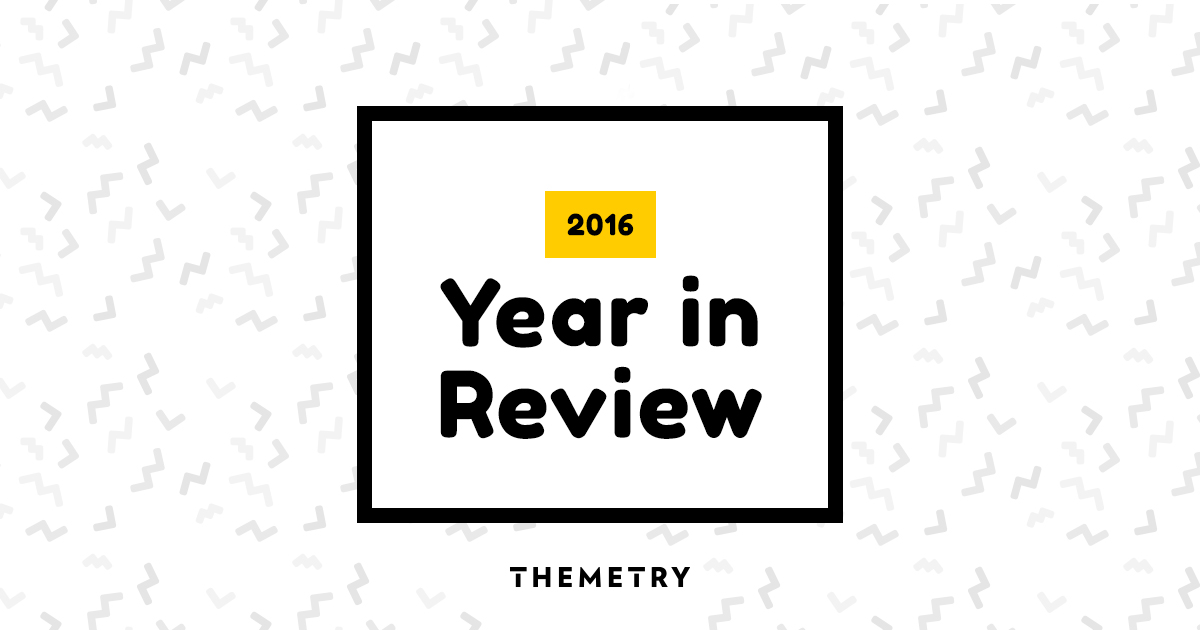 Experimenting with “just a theme shop”

When you take a look at some of the original big players in the WordPress theme space, you’ll notice they realized one of two fates:

While the companies that lasted through 2016 still continue to sell themes in some capacity, it’s a far cry from their original product lines.

Most would see these adaptations as a warning sign, but I saw it as an opportunity for “just a theme shop” to move in to that vacated space.

After over a year in business, it’s difficult to come to any other conclusion besides, “they were onto something.”

Whenever somebody asked me how business was going, I’d respond with something along the lines of, “financially, I’d be better off with a real job.”

But, when I considered that I no longer had to:

I quickly followed up with, “emotionally, I couldn’t be happier.”

Thankfully, I had a steady stream of client work to pick up the slack.

Running my own business was something I’ve always wanted to do, and now I’m finally doing it, with some degree of success.

While the ultimate goal is to transition completely into product, I’m glad I didn’t expect theme sales alone would keep me afloat, because they wouldn’t have.

How theme sales can improve

I wish I had a definitive answer to this, but I have a few ideas:

Themetry themes are often described as “beautiful” and “unique” (which is mainly a compliment to theme designer, Tung Do) but the people who describe them as such rarely ever buy them.

Not to say food blogs or fashion magazines can’t be turned into full-fledged businesses, but I’d imagine the people looking for WordPress themes in these niches would rather experiment with a beautiful free theme first (of which there are plenty), see if it sticks, then maybe proceed to a more “premium” solution.

For a “business,” (again, I’m well aware blogs and publications can be businesses) a truly professional web presence could be the difference between landing that big client, or losing them to a competitor whose website doesn’t completely suck.

Therefore, a “business” (or an agency representing a business) would be more likely to want to purchase a theme, a mission-critical component of their online operation.

The three plugins referenced above were no accident. People make websites to make money, whether directly or indirectly. When a website makes money directly, it’s easier to sell the tools to make said website.

Taking the hint from the aforementioned theme companies, there’s still more to adapt to really grow Themetry in the future.

One of the main reasons Theme Lab became so popular early on is because I gave away so much free stuff. But that had the (unsurprising) downside of being totally dependent on advertising and affiliate revenue, with close to zilch in product sales with people being so conditioned to free.

With Themetry, I overcompensated by distributing all paid themes. The (unsurprising) downside? Not being very popular.

There needs to be more of a balance between free and paid content. So expect more free themes and tutorials in the coming year.

A focus on education

WordPress theme development is an in-demand skill, and from conversations I’ve had with beginners looking to learn the topic, there is a strong appetite for high-quality training content.

The name “Themetry” and accompanying slogan “Mathematical Precision to Detail” were deliberate choices, to keep my options open if the “just a theme shop” route didn’t work out.

One of the options I had in mind was education. Playing off of our current homepage hero copy, doesn’t this have a nice ring to it?

Learn how to make themes with mathematical precision to detail

While new themes will be created, and existing themes will continue to be maintained and supported…expect to see a lot more educational content in the coming year, including a full-fledged course or two.

Training would be geared more towards those seeking jobs, freelance or full-time, in the WordPress theme development field, not those seeking to launch theme shops. “I can teach you how to not sell very many themes too,” doesn’t seem like a winning pitch to me.

Outside of sponsoring a couple of WordCamps, and a short-lived Facebook ad campaign, I barely advertised at all.

People who know me from the WordPress world would often seem surprised to hear that I run a theme company at all.

I even have my own WordPress community forum, and don’t even advertise on my own site.

I’m going to set aside a modest monthly advertising budget, to get more qualified prospects coming to Themetry.

I’m convinced we have a valuable offering, but not nearly enough people know about it.

Self-employment doesn’t (or shouldn’t, at least) mean you’re totally on your own. There are a number of people who helped me throughout the year.

Living near family was the #1 reason I never felt like I was ever really “on my own.”

Having such a vibrant local community to lean on was something I was very thankful for throughout the year.

I called on the WP Chat community many times throughout the year to gauge their thoughts on things. For example:

I basically used it as a WordPress-focused survey platform. The insights gleaned from them were always very interesting.

Even though I’ve been making themes for a decade now, I learned an incredible amount this year from the WordPress.com theme team.

The tips I learned will improve accessibility and user experience for all Themetry theme users.

Special shout out to David Kennedy and Ola, who have each performed multiple reviews of Themetry themes for WordPress.com.

You always hear the phrase “surround yourself with people smarter than you” but that’s easier said than done when you’re the sole employee of a company.

Luckily, in the WordPress community, you can virtually surround yourself with smarter “competitors” for a similar positive effect.

I knew I could always count on Ben and Sami, both being fellow WordPress.com theme authors, to bounce ideas off of and tackle difficult problems that I would’ve been totally stumped on otherwise.

The brilliant designer of 87.5% of Themetry’s themes.

If it wasn’t for Tung, I’m not sure if Themetry would even exist. And if it did, everything would look a lot different.

He designed the Adaline theme (in 2015, so I can’t talk about it too much) that essentially catapulted Themetry into business when it was accepted to WordPress.com.

In 2016, he designed the Themetry website, and five other themes throughout the year.